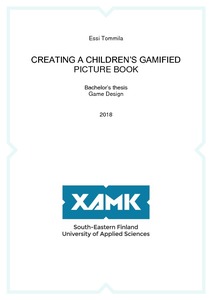 This thesis was based on the game The Little Cat and The Rainbow Egg which is an interactive gamified storybook for children from the ages of 5 to 10. The game was published on Google Play and can be played with a tablet or a phone.

The purpose of this thesis project was to work as a showcase of the idea of creating a well-functioning picture book for children with gamified elements that enhance the immersion of storytelling. The goal was to make a professional and functional product with emphasis on the visual style.

The game was produced by three people, programming and music were done by outside partners, the author was working as a lead designer and artist.

The design and idea of the product is based on theoretical backgrounds that are presented in the first part of the thesis.

Other notable things the report talks about are storyboarding, art, stylizing of illustrations and technical development such as programming, animation and music.

The result of the project was a complete game. The report also discusses the results of beta-testing with a test group, and thoughts on how the product could be improved further.