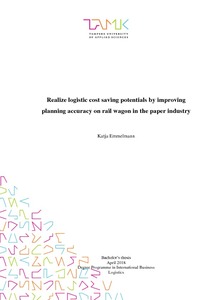 The thesis tries to find out how the pre-transportation process via train of Kymi mill in Kouvola, Finland can be improved. The objective was to analyse the current process of ordering wagons, how the needed volumes are calculated, by which they are influenced and then to make suggestions for improvisation of the whole process. For this, the two pre-transportation planners of Kymi mill were interviewed.

The analysis of the answers of the planners, as well as the analysis of the production process and influences on it show, that the wagon ordering process and accurate calculation for it, is a very versatile. Because of Kymi mills’ large portfolio and many production lines (two paper machines, 3 lines of cutsize and 3 folio lines) any disturbance and variations in the production cycle has a big influence on the pre-transportation process, especially the transportation via wagons to the ports.

The analysis concluded in development suggestions for the pre-transportation process, as well for the production process. These aim to limit the negative influences on both processes and to simplify the calculation of needed wagons. It is suggested that an additional tool should be created for that, as well as shift supervisors should be made aware of their actions and thus influences on the wagons transport by changing production against planners’ orders.