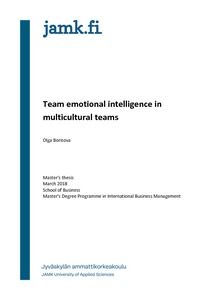 Team culture may serve as a unifying element among culturally diverse team members. It can be defined as a set of values and norms, which the team members agree on, respect, follow and believe in. Likewise, team emotional intelligence (later TEI) can also be approached as team culture.

The objective of the study was to open up the phenomenon of TEI through the TEI model developed by Druskat and Wolff, understand the role of TEI and its perceived meaning as well as see how TEI was visible in multicultural teams. Despite the use of a concrete model, the study aimed at viewing the phenomenon in a holistic way: social meanings were fully constructed by the research participants.

The study applied qualitative research methods and was abductive in its nature. Structured interview was employed as a data collection method, which was considered a qualitative method since open-ended responses were received. Six team members participated in the research. Three team members represented a multicultural team in an IT company, and the three other interviewees were teammates in another multicultural sales team.

The findings of the study revealed that some TEI facets were perceived by the team members as more relevant and important for teamwork than the other facets. Additionally, some facets were embodied in a different way from what the TEI model suggested. Apparently, both teams developed their own team cultures, which partly included TEI norms. Presumably, these already developed team cultures served the needs of the teams to some extent since no major matters related to cultural diversity appeared. The research, however, did not address the issue of teamwork efficiency. Thus, it was impossible to understand whether cultural diversity was addressed in the most optimal way to benefit from it.