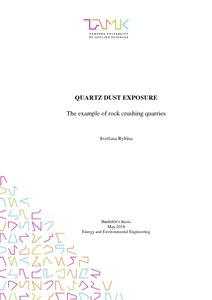 This Bachelor’s Thesis was commissioned by a Finnish company Destia Ltd regarding quartz dust exposure on rock crushing quarries. Expectation of possible tightening of regulations created the necessity to measure dust amounts and analyse quartz dust concentration in the area of two quarries, also to evaluate exposure of workers and estimate if Destia is ready for the coming limitations.

The sampling was done in two rock crushing quarries: Syrjänsalo in Ylöjärvi and Pitkäkallio in Lempäälä near Tampere (Finland). Duration of each measurement was three working days. Data was collected with ELPI (Electrical Low Pressure Impactor) and used for particle size distribution analysis and workers’ 8 hours TWA exposure evaluation. PM10 Impactor was applied to calculate the average dust mass concentration in the air, also dust collected with PM10 Impactor was used for mineralogical composi-tion analysis with X-ray diffraction method. Device DustTrak was used for construction of dust distribution maps.

One of the most important findings is the detection of quartz in dust samples. It was found that working machines in the quarry influence the amount of PM10 particles in the air greatly. Average dust concentrations lay within the allowed range, however, maximum values of dust concentration detected might pose danger to human health in cases of prolonged exposure. In the scope of this work, it was impossible to evaluate the exact amounts of quartz dust in samples, that is why part of the results is estimated based on petrographic analysis provided by Destia Ltd.

From the results it can be concluded that even in the worst-case scenario 8 hours TWA exposure to quartz dust is not exceeding the established values, however, in case of Binding Occupational Exposure Limit establishment extra measures have to be taken in order to avoid exceedance of limits. It was noticed that dust spreading depends on wind direction and speed, temperature, humidity of air, amount of working crushing units. To find a clearer dependence of these factors further research is needed. In the studied case, at least, it can be safely said that dust is not spreading far beyond quarries borders. It is not easy to make any firm conclusions about quartz dust behavior since it was not possible to detect its mass content in samples. One interesting fact was noticed, the amount of quartz dust released from solid material is not proportional to the quartz content in this material and under certain weather conditions can be much less. This fact tells that more research and experiments have to be conducted in order to understand the behavior of airborne quartz dust.