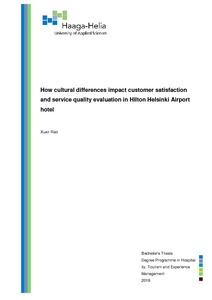 There are a lot of ethnic groups worldwide. With the differences in ethnic groups comes a difference in the cultures and great changes in their tastes and preferences. This comes about due to the different beliefs and backgrounds of these people. These differences do not only have an effect that is evident from their behaviour but also on what they prefer. For in-stance, in the hospitality business, what is the most supreme objective is the ability to satisfy the customers. All the activities carried out are usually customer driven. Evidently, the cultur-al differences make customer satisfaction very difficult to attain. This report mainly concen-trates on getting to establish the difference in these cultures, the way the satisfaction re-quirements differ because of the same and to establish the level of quality that is referred to as satisfactory. A definition of this quality is that determines the services offered and the quality of the same that is delivered.

Different cultures will be sampled to help establish the results of the cultural differences that are evident in the hospitality industry and what effect these differences have on the definition of the kind and range of services that customers expect in hotels. This is in light of the fact that, currently, there is a huge surge in the field of globalization and internationalization. Therefore, there is an expectation of receiving foreign customers even in the different local hotels.

With the guiding of existing researches done by worldwide scholars, the author used concep-tual frameworks to understand the study and to analysis the primary data. The author works in Hilton Helsinki Airport hotel. 80 questionnaires were applied from December 16th to De-cember 19th, 75 respondents returned the questionnaires while 5 did not return it. The analy-sis was done by IBM SPSS software.