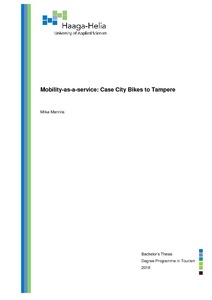 This bachelor’s thesis explains the mobility mega trend “mobility-as-a-service” and its ties with city bikes. The thesis focuses on the subject of setting up a city bike scheme to Tampere. The subject is current because after the success of HSL bikes in Helsinki, many cities around Finland have been planning city bike initialization.

The thesis includes benchmarking of two internationally known biking cities, Amsterdam and Copenhagen, to understand how they have succeeded. Another benchmarking target is HSL bikes with two cities in particular – Helsinki and Espoo. Helsinki, because most of the bike users live there, and Espoo, because it is nearly identical to Tampere in its surface area and population.

The following chapter explains Tampere as a cyclist city: its current situation, constructions of the tramline, and future plans. Currently Tampere doesn’t have a city bike scheme, only a small rental bike business model. Tramline constructions distract cycling during years 2017-2021 and again during years 2021-2024. The Finnish Transportation Agency has offi-cially suggested a plan at first with 36 stations and 400 bikes and later 45 stations and 500 bikes.

Mobility-as-a-service (MaaS) is a current mega trend rising in the past years. The idea behind it is to provide mobility services and combine many methods of urban transportation together, including city bikes. There is a pursuit to make city cycling a part of people’s mobility chains.

A quantitative survey was conducted to understand locals’ of Tampere opinions and planned usage reasons for the bike: utilitarian or recreational. The answers were collected electronically. Two surveys were created on Webropol, one in Finnish and one in English with 13 questions. The surveys went live on 10 April, 2018 (Finnish) and 11 April, 2018 (English). The data collection period was 2 weeks, ending 24 April, 2018. 121 answers were collected in Finnish and translated to English by the author. Roughly on average, the average respondent would be ready to pay for the bike 1-3€ hourly, would like to pay for the bike per use or mix between seasonal subscription and pay-per-use depending on use, would be a utilitarian user, sees the city bike as the best option for a 2-4km journey. The final open-end question gathered 34 comments with valuable ideas for city bike implementation. Many people expressed a wish that city bike rental could be done with the Tampere (TKL) bus card (an example of Maas) and were worried about the condition of the bikes.