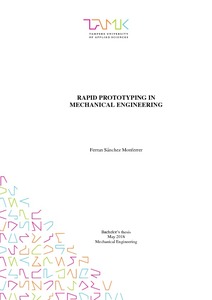 The purpose of this study was to gather information on rapid prototyping technologies and 3D scanners in order to be used in the future as educational material in TAMK for incoming students. Another objective was to test the TAMK guides of the 3D scanner that TAMK possesses and apply the guides to a larger object.

The theoretical content was collected from the sources which can be found in the references below. The test of the TAMK guides of the 3D scanner consisted on scanning the boat provided by the ACOLOR project. The scan used was the “HandySCAN 700” made by Creaform. The scanned data was post-processed in the laboratory of TAMK with VXelements.

All the information of the theoretical content in rapid prototyping consisted on the basic process on printing, the materials used for printing and its advantages and disadvantages of printed prototypes. In the theory of 3D scanners the different technologies currently used were explained. The result obtained with the scan of the ship and its post-processing was the internal surface of the ship. The members of ACOLOR project assembled the structures modelled with the scanned surface.

The theoretical content resulted in a basic guide of rapid prototyping and 3D scanners that future students could create complete course if they are still working on it. The results of the scan and the post-processing of the boat indicate that the optimal workflow was found to post-process large and symmetrical objects in VXelements. In addition, the limitations and the optimization of the computer of the laboratory of TAMK were found.