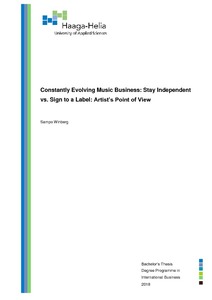 The mark of an artist making it in music industry, throughout its relatively short history, has always been a record deal. It is a ticket to fame and seen as the only way to make a living with your music. Most artist would accept a record deal without hesitating. Being an artist myself I fall into the same category, at least before conducting this research.

As we know record labels tend to take a decent chunk of artists’ revenues. Goal of this thesis is to find out ways how a modern-day artist makes money, and can it be done so that it would be better to remain as an independent artist. What is the difference in volume that artist needs without a label vs. with a label? Can you get enough exposure and make enough money that you can manage without a record label?

Technology has been and still is the single most important thing when it comes to the evolution of the music industry. New innovations are made possible by constant technological development and they’ve revolutionized the industry many times. First it was vinyl, then CD, MTV, Napster, iTunes, Spotify etc. Development has opened up new possibilities for independent artists. Recording, distribution and marketing have become possible for everyone. “Evolution of Music Business” -chapter will be going through the major changes that have shaped the industry to its current state.

Today’s artists’ need to have many sources of income. After piracy and downloading services almost killed all record sales in the early 2000s, artists’ revenue streams needed to diversify. Streaming has become the most popular way to consume music and people pay for access to music rather than owning it. As streaming royalties usually don’t leave artists with enough money they are forced to look elsewhere. “Artist’s Revenue Streams” -chapter goes through the main sources of income today’s artists have and presents the differences signed and independent artists have in their income streams.

To conclude the research, I’ll be evaluating whether it still makes sense to sign a record deal or would it be better to remain as an independent artist.