Visual Storytelling of a 3D Environment 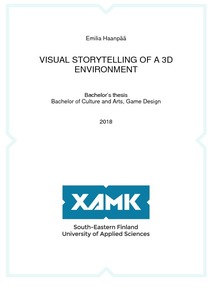 There is a common expression of “A picture is worth a thousand words”. A visual storytelling can be seen in all type of medias, most noticeably in two-dimensional ones, but can and should be also implemented to three-dimensional platforms such as games.

This bachelor thesis researches and discussed possible ways to visualize storytelling within a 3D environment. This written report goes in detail of composition, value, color and light and how to use those as an artist to implement mood and atmosphere, to support the story of a 3D environment.

With the aid of the thesis research, author has planned and created a concept art of a stylized 3D environment that is developed by the standards of the study. With the concept art as a base, stylized 3D diorama is planned that tells a visual story to its audience in subconscious level and supports the author’s implemented story.

In conclusion, the thesis summarizes that the author could use the research material to create 3D environment that captures the wanted storytelling and delivers it to the audience. However, author fails to create diorama out of the scene as originally planned and creates a video of the environment instead. Video and some separate images of 3D scene has been uploaded to Author’s ArtStation-website’s portfolio.