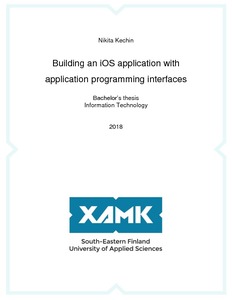 The main goal of this thesis was to study common technologies using in an iOS development and then to get familiar with application programming interfaces on practice. This work was logically split into theory and implementation parts. Each part allowed taking a look on application development issues from different points of view.
The theory part of this work covered core classes of the UIKit framework such as UIView, UIViewController and UITableViewController. Also, view geometry and coordinate system were explained in order to go deeper into more hardware related lower abstract levels from higher abstract software-related UIKit framework. In conclusion of the theory part, application programming interfaces used in implementation part were covered.
As for implementation part, the main idea was to go partly throuth the life cycle of a mobile app development, while developing the practice project. This cycle included app prototyping, designing UI, designing an app’s logic, etc. The practice project was map- based iOS application called FindSpot. The FindSpot app was designed to help people to search and share places in the nature for outdoor activities.
As a result, the map-based iOS app prototype was created. During the development process, huge amount of experience in programming, user interface design and software design was received.