Prospects and Challenges of Organic Farming in Rajshahi Division, Bangladesh 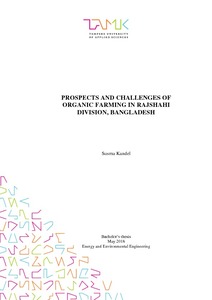 The main objective of this study was to gather information about the prospects and challenges of organic farming in Rajshahi division, Bangladesh, which is one of the commercialised divisions with excellent road, communication, water supply and transport infrastructure. The method used was qualitative research based mainly on data and information collected from the internet. The data sources were journals describing case studies as well as reports from official websites of Bangladesh. Additionally, interviews were taken from the thesis assigner itself, from a person of local NGO and from some people of Rajshahi division, Bangladesh.