Development of a Centralized Database Backup Management System with Node.js and React 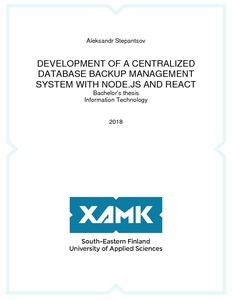 The purpose of this thesis was to show the importance of data security for databases, explain the related challenges and risks and to provide a solution for the discovered problems. Such a solution is needed because databases are used to store many kinds of data and both individuals and businesses cannot afford the critical information to be completely lost.
The basics of cloud computing were described and it was shown how cloud solutions could be applied to the information security field. In the theoretical part, backup methods were studied for MySQL, PostgreSQL and MongoDB. Possible security measures and their implementations were also explored. The main tools that were used for building a solution were introduced.

Based on the study, a software solution allowing performing and managing database backups in a centralized manner was developed using Node.js and React. The entire process and the methods of development were explained. The application was built in a modular way, so it could be easily altered. As a result, a working solution was presented and tested.

Possibilities for the further development of the application, such as support for the additional database engines and storage providers, were listed and described. This thesis was closely related to a huge number of other topics in the information security field and could be used for researching many of them.