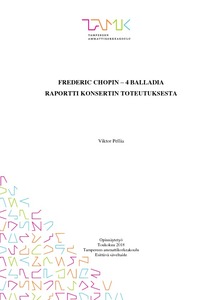 The author made his thesis in a concert form. The concert “Frederic Chopin – Four Ballades” was held on 10.10.2017 at Tampere Music Academy’s Pyynikki Hall. The concert consisted of only Chopin’s music and all the works were performed by the author of the thesis. The program was following: Frederic Chopin – Four Ballades: No.1 in G minor, Op. 23, No.2 in F major, Op. 38, No.3 in A-flat major, Op. 47, and No.4 in F minor, Op. 52. After the Ballades, Frederic Chopin's Mazurka in A minor Op. 17 No.4 was performed as an encore.

The main objective of this thesis was to delve into making a musically interesting and professional concert, which includes the whole cycle of works by one composer. The aim of this written report was to clarify the practicing process and the progress of the concert itself. In the report, the author tells about the composer, introduces the pieces played in the concert more closely, and explain the working process in detail. The ways of practising were gathered by participating in piano master-classes and collecting the advices of many teachers from different countries.

More attention has been paid to author’s own ideas and experience. As sources the author used biographies, general dictionaries, music analyses of composer’s works and different music scores. The poster, program and the video of the concert are found as attachments in the thesis. The results show that the performer and members of the audience were satisfied with the performance and the evaluator’s opinions gave interesting information for the developing process.