Continuous integration - the enterprise strategy : Development of Maven plugin, promotion of an algorithm 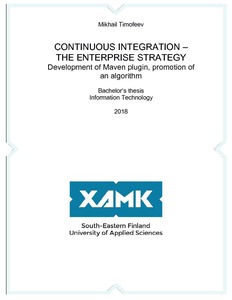 The objective of this thesis was to prove that it would be possible to minimise the risk of error getting to the production environment when compiling the application made by several independent developers. This way of development is called continuous integration and is extensively used in large business environments.

The method used for identifying the right way to approach the task was programming. To make it happen the “middleman” layer of software was added to replace the manual work of assembling sources into packages. The programming language was Java and the build system was Maven.

This experiment showed that filtering out most of the errors during the phases of assembly and tests was achievable. It was also proven that distributing smaller task parts among different task executors was not only safe but it also greatly improved the performance and coherence of process overall.