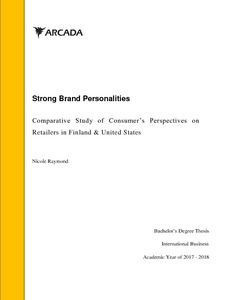 This thesis aims to find a strong brand personality based on consumer’s perceptions and recollections for one local and one foreign retailer in two countries. The survey was an adaptation of theoretical frameworks based on Jennifer Aaker’s Brand Personality Scale, Kevin Lane Keller’s Customer-Based Brand Equity Model, and additional frameworks of Neuromarketing. An online quantitative survey was divided between Finland and the United States, distributed on Facebook to a total of 100 participants. A cross-comparative analysis was conducted by using SPSS and manual analysis methods for the primary data. Finnish participants successfully identified two strong brand personalities for Stockmann – Competence & Sophistication. However, US participants were unable to conclude the same for Wal-Mart, even though there were highly rated traits. The researcher used a five-point Linkert scale for the survey questions, thus anything ranked below a 3 was deemed as a weak score. In correlation to the CBBE Model, Stockmann reached level three of Brand Response, in comparison to Wal-Mart, which only reached level two of Brand Meaning. The general response from all participants in relation to the foreign retailers were rated in a neutral respect in regard to the BP Scale. Moreover, positive feedback was shown regarding the foreign retailer’s logotype. Based on these results, the logo did evoke some emotional response in the participants indicating that Neuromarketing has some influences on the recollection and visual perceptions of these consumers. With utilizing these frameworks, a company can collect data on how their consumers respond to their brand. Thus, allowing the company to rebrand themselves accordingly if the results are conflicting with the mission, values, and vision. Furthermore, the usage of Neuromarketing could be the additional step to ensure that the consumer is being influenced correctly with visual stimuli that creates an emotional response.