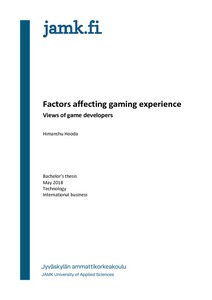 Gaming industry is booming at an unexpected rate along with rapid technological advancements. E-sports viewership has increased many folds in past few years. Technological advancements and changing customer habits have influenced the reliability as well as the sustainability of the past researches which calls for the need for updated studies. Gaming has not only been limited to playing and recreation but now has become a source of Income for players as well as content creators on digital platforms like YouTube and twitch. Since much of the existing literature talks about user preference in a game, only a few relevant researches regarding demographic influence on the development process have been accounted for. Author’s personal interest in the field and the opportunity to find new dimension to the existing findings was the reason to carry out the research.
The research aims to find out whether there is any demographic influence on the developers while creating a game design. Also, what factors are crucial from the viewpoint of the developers while designing a game, whether their profession or liking for a game/genre affects their rating and designing process. The research was carried out by asking the respondent group to fill in a survey, which was passed on to several Individuals and institutions related to game development. During the data collection process, a total of 72 people responded to the survey with a mixed group composition. Since the number of respondents was not large enough to qualify for a full scale statistical research only descriptive statistics of the results were presented. Any pattern observed was an indicative of what could happen if a large-scale research is done.
Role playing games were a choice for both the gender groups whereas Educational games were a future choice of work by many respondents. Female group showed lot more compassion when asked about providing help to the player in a game. A notable conclusion was the lower rating for social connectivity as both the gender groups saw this factor as least important while creating a game design.