Analysis of an Open-Source Recycler : The 3DBear Recycler: Origins, the MkI recycler vs the MkII, and how new versions can have the greatest global impact. 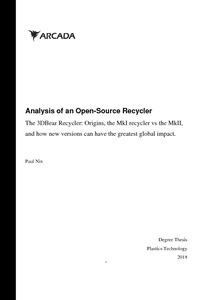 Waste accumulation is a global problem, in order to address it the economic and cultural contributions in a shifting economy must be considered; additionally modular open-source devices like the 3DBear recycler offer a possible scalable solution. This thesis is a review of the processes that led to the construction of the 3DBear MkI recycler, an analysis of the MkI recycler in comparison to proposed changes for a MkII version, as well as an ex-planation of the niche such a device would fill and its value locally and globally. The 3DBear recycler is a device designed to make waste plastic into 3Dprintable filament. This thesis is a qualitative assessment in the field of material science and engineering re-lated directly to recycling and sustainability. The aim of this study is to both concisely document the current build of the recycler and its history, and to outline next steps and value for the continuation of the project through the proposed revisions and later itera-tions. It is meant to outline the value of the project in a way that is academically relevant; additionally it is meant to demonstrate this value in settings urban and rural, developed and third world. The current build is broken down and explained on a system by system basis, not as instruction to build the device, but as a breakdown that explains the function and interconnection of the systems. Then the proposed changes are described, again on a system by system basis, providing specific reasoning and rationale for each change. The proposed updates make the MkII device significantly more valuable in part because it be-comes less expensive to build, and in part through simplification. By ensuring that the de-vice is well documented and referenced its open-source value will increase as its exposure is increased, and further versions and applications will flow from this same exposure as different groups build and work with MkII or later 3DBear recyclers.