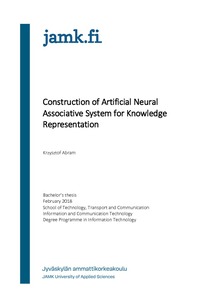 Artificial Intelligence (AI) is all about creating automatization of processes, which previously were considered as human abilities. Reasoning seems to be the most important one, because it can create an entirely new quality and allows to make an agent independent. However, reasoning must be based on knowledge, and then this process can obtain meaningful results. The knowledge base can be created in many ways; one popular way is to create artificial associative neural memory, which can store knowledge in synaptic connections between neurons.
AI is modern science and since its beginning, there has been a huge amount of research. There is also significant progress in knowledge representation, which can be divided into many classes, e.g. common sense, spatial, temporal representations. Each of them requires another approach and way of thinking.
The model of the associative neural memory can be applied as a knowledge system. One of well-known methods is to implement Hopfield Neural Network, thus obtaining auto-associative dynamic memory system. Memory can store a certain amount of data, which in context of neural memory shall be named patterns. The system should have the ability to learn a certain amount of patterns and later retrieve them by giving incomplete information, very often called a clue.
The system was implemented in C++ language with Hopfield Neural Network as core. As the training algorithm, the Hebbian Rule was chosen. The implementation contains many helping classes, created with the purpose to store data in computer memory and perform some operations. There are also graphics operations, which allows creating a picture from a raw binary format. This way the results can be interpreted by a human.