How do the startup accelerators help the start-ups to scale? : Case study Kiuas Accelerator 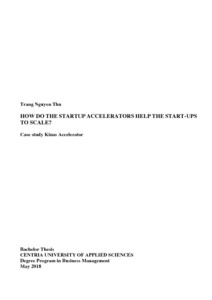 Start-up entrepreneurs emerged as a phenomenon all over the world and in Finland as well. However, becoming a founder of a startup is one of the most difficult journeys. The young entrepreneurs can create a lot of breakthroughs which will play an extremely essential part for our future. In contrast, they lack the experiences to establish a business. As a result, many potential startups fail because they have not received proper support. The concept of startup accelerator was appeared to support the early-stage or growth-driven startups to reach their potentials and boost their chances for success.

The purpose of this thesis is to distinguish the startup accelerators from other institutions which also support the early-stage startup such as incubators. Not only that, it can be used as the guideline for startup founders to choose the right acceleration programs and join the programs. The thesis was designed to understand the structure of acceleration programs and their roles in helping startups to scale. The case study is Kiuas Accelerator’s program which is produced by Aaltoes (Aalto Entrepreneurs Society), to give a look inside an accelerator.

The theoretical part was conducted from recent researches, reports, journals and books which provide prevalent insights in term of definitions and business models used. For analyzing the case study, an interview was conducted with the leader of Kiuas Accelerator Program to have an accurate picture of an accelerator program in reality.