The country-of-origin effect and its influence on consumes’ perception of product quality and purchasing intentions. Case: Luxury clothing brands among the Muscovites 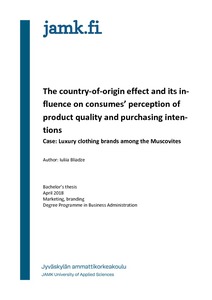 In the global world, the country of origin is at present a more important factor for the consumers than ever in history. Associations with a territory with a high proprietary image are a significant advantage for commercial brands in comparison with the competitors that do not have such associations.
The objective of this work was to determine the perception of the image of luxury clothing brands among the Muscovites based on territorial positioning. Another objective was to define the principles of a successful application of territorial positioning, especially with regard to the aggravation of the relations between Russia and the West, the fall of the ruble, the introduction of sanctions and attempts to popularize the import substitution.
Being highly competitive and dynamic, the global clothing market of the luxury segment attracted the author’s interest. Italy was chosen for the study because of its strong brand as a country. Moreover, Italy has a rich cultural heritage and it has a special position in the “luxury” and “fashion” categories.
The data was collected from a survey, which was held online and in person among the residents of Moscow.
The existence of positive associations with goods of Italian origin was acknowledged. Recognition of the significance of territorial positioning in the example of Italy was expressed to a considerable extent in increased willingness to purchase goods of Italian origin.