Creation of Concept art for a horror game 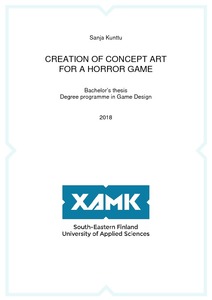 The topic of this thesis is how to create concept art for a horror game. Additional questions are what makes a person scared and why, and how these elements are used in horror games.

The creation process consists of analyzing fear from a psychological aspect, the objectives of horror entertainment, an in-depth analysis of different horror games and a flexible modeling executed with test subjects. The end conclusions will act as an inspiration for the concept art, which is created for a certain horror game idea of the author.
The research methods in use are qualitative content analysis, case study and flexible modelling.

The written part starts with introduction, which is followed by the psychology of fear and common themes of it and horror. After the theoretical part a qualitative content analysis of six themes of fear and horror and their occurrence in twelve different horror games is executed. Every element is studied carefully among various video game cases. After the in-depth study of these elements in different games, test subjects are creating the basic designs for the character and the environment, which will be taken into further investigation and development by the author. The end result will be a fined piece of concept art which represents the original horror game idea of the author.