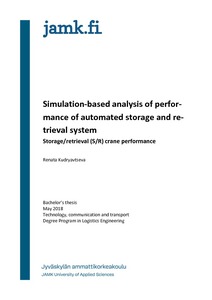 Automated storage and retrieval system is one of the major material handling systems,
which are extensively used in automated productions and distribution centers. AS/RS has
been utilized as a part of advanced manufacturing and as an alternatives to traditional warehouses.
AS/RS is greatly suitable for work-in-progress storage in factories. In addition, it can
simplify inventory control and improve cost-effective utilization of time, as well as space and
equipment.
Automated handling systems have been used in warehouses since 1950s, initially focusing
on heavy pallet loads. However, with evolution of the AS/RS, types of automated storages
have become smaller and are designed for any load sizes. The advantages of AS/RS are intended
for moving loads with high volume and materials handling speed without interference
of an operator. The main disadvantages are high investment costs, less flexibility, and
higher investment costs in control system.
Statistical approaches are in trend nowadays. Statistics as science have developed in 17 century,
but only now it has got tools to implement its principals. Due to development of ITtechnologies,statistical
calculations have become easier with MS Excel, Simulation software
and Mathematics software. For example, queueing theory’s method had taken a lot of
hours, if somebody would make this one on paper manually. However, now all calculations
are done with computers and time required to develop simulation model have decreased
significantly.
It's a good approach to apply statistical rules to analyze performance of AS/RS. The simulation
approach will show better relationships between components of AS/RS and a dynamic
system’s parts.