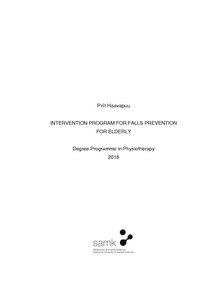 As we know the world population is aging and will continue doing so. According to the United Nations there were 7.6 billion people on earth by middle of the 2017 of which 13 % were aged 60+. Due to the aging population there is increasing incidents of falls and stumbles amongst elderly which require medical attentions and can involve long term hospitalization and eventually loosing independents. We know that medical and health care is costly, in United States the direct cost of fall related injuries is 0.1% from the total health care expenditure and corresponding number amongst EU countries can be up to 1.5% from total health care expenditure. This gives a reason to find more economical way to increase health span amongst elderly.

Objective of this thesis is to promote strength, stability and balance exercise program for elderly which would be shown on the Närpes community TV. Exercise program has 3 difficulty levels, were previous level helps to prepare for the next level. Objective is that by promoting exercise program which will be on Närpes TV 2-times a week that more community dwelling elderly would be exercising regularly and would get their daily dosage of exercise required to stay independent and active. Research on falls and stumbles prevalence, cost and benefits of exercising for elderly people was conducted.

As a result, neuromuscular exercise program for total joint replacement (NEMEX-TJR) was chosen. Later named as NEMEX exercise program because main target group is community dwelling elderly. Protocol has 10 exercises with 3 difficulty levels. Modifications were made to the original protocol to make it more suitable for widespread use. After every 4 weeks exercise from next level will be shown on the tv.