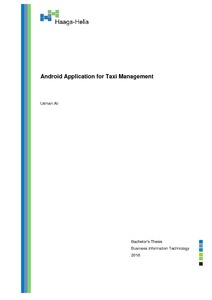 Android applications are indeed a very handy tool for android users. Android users can access to several Applications at the same time from one android device. Applications did not only remove the problem of communication but also solved several issues in daily life such as tracking assets, banking information, media, education, sports and so on. The importance of applications for android devices cannot be ignored. It brings several benefits for users and owner of the app. Moreover, the number of android users is also in millions and growing all the time.

This thesis is also about android application and the goal is to track location of device holder especially in the taxi business. Therefore, we researched on location tracking of android phone devices and to record the location for long term that will also be accessible for future. The purpose was to find out that how is it possible that applications can record location of android users. Moreover, admin and others can access the location of taxi driver and the fuel recharged in car by driver.

Several technology tutorials and courses were taken online to understand that how tracking application works. The study of android application helped to make a multiple small apps to get the idea about android platform. After that, the development was narrowed down to android google maps. Furthermore, studying google maps docs was also making a way to achieve the main goal of the project. All the learning methods were implemented to test the application in multiple android devices.

Finally, we found out a way that connected us to the destination of research project. It was server and database who were sitting behind the application and the android google maps api was involved with them. Google maps api was taking the coordinates and sending to the server that was storing into database. The data was accessible at any time in future so android device was making the get request as well as fetching the data from database. The data was drawing lines by collecting all the coordinates. Therefore, we found the actual path and movements of device holder.