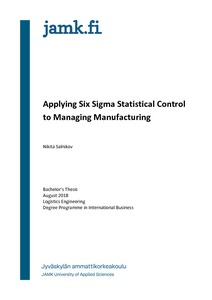 Six Sigma is known as a useful methodology for analyzing production efficiency and estab-lishing statistical control as well as for ideation of process improvements. If a factory de-cides to implement Six Sigma statistical control at its production site, it will require a thor-ough plan and preparation. However, little has been written about how to do it step-by-step and how to obtain the most of it for the factory and the business.
In order to create such a clear and practice-based plan for Six Sigma implementation, dif-ferent theoretical concepts were studied. They included descriptions of manufacturing strategies, of Six Sigma and relevant methodologies as well as Six Sigma tools analyses and the Six Sigma mathematical concept explanation. All these theoretical elements were ac-quired from different authoritative sources and discussed based on their relevance to the topic.
The above information was then utilized to generate a new Six Sigma implementation plan.
The steps of this plan were implemented at a case company in the city of Chelyabinsk, Russia. It was a case study of a specific production line. The study process included quanti-tative and qualitative data collection with further analysis. The results of this study were: established working tools for statistical control, thorough analysis of the current state of the production line and proposals for improvements.
Hence, the Six Sigma implementation plan was a combination of information acquired from both theoretical and practical research. Although it was tested only at a single indus-try-specific factory, the plan is supposed to be a general how-to-do scenario for all the companies that want to implement Six Sigma.
In conclusion, Six Sigma is a useful methodology and tool that can significantly improve the control and understanding of a production site as well as create a process where improvement ideas can be generated on a constant basis.