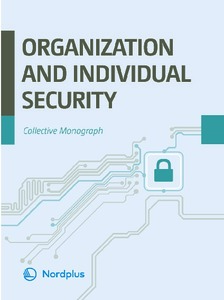 Nowadays the rapidly advancing technologies and the ongoing changes in the socioeconomic and political processes in societies have stipulated an increased attention to security issues. In its broadest sense, the notion of security affects each and every member of society. At the age when the majority of borders are open in the direct and indirect sense of the word, the possibilities of humans and technologies become increasingly limitless. However, these opportunities are often not directed positively, but are rather targeted at causing harm to others. In this case, we can talk about both: sensitive migration issues and acts of terror, as well as about human interrelationships in general. It is no secret that we feel at our best in an environment, which is comfortable to us. Thus, any larger or smaller disturbance creates a sense of alarm due to the feeling of threat to one’s own security as well as the desire to protect oneself. Security (being secure, protected against failures, fears, aggression) occupies a prominent second place in Abraham Maslow’s pyramid of the basic human needs, closely following such physiological needs as food, sleep, rest and others. Therefore, paying attention to even the tiniest potential threats is a priority for everyone and generating response taken at an individual level and organisational level.

By starting already with the historical development of security throughout centuries and ending with cybersecurity, the book addresses issues related to individual security and the security of organisations. The articles provide an insight into the notion of security, its concepts in the global world, ethical issues of security, risk and quality management and leadership. They also address issues of physical guarding services, Schengen Area, fire safety, video surveillance and others. A separate chapter is devoted to security training as well as crime prevention, whistleblowers and cybersecurity.

The book has been developed as part of the “Development of Society and Organisation Security Programmes 2017” project (Project No. NPHE-2017/10115) and has brought together authors from three institutions of higher learning - Turiba University (Latvia), Kazimieras Simonavičius University (Lithuania) and Laurea University of Applied Sciences (Finland). It aims to clarify various issues related to the security of individuals and organisations and targets everyone interested in gaining insight into various security-related issues from the perspective of scientists and practitioners of Latvia, Lithuania and Finland. However, it should be noted that those interested in in-depth studies of security would require further reading, since the book does not aim at becoming a comprehensive source of information on all subjects, but rather provides an insight, raises general awareness and understanding of the issues and hopes to generate interest for further studies. Each article can be read as a separate issue.