Cultural aspect of doing business in Cameroon and business opportunities 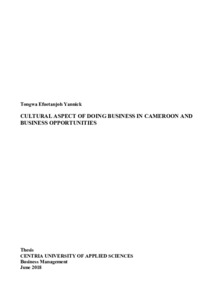 Cameroon is a developing country doing everything in it power to make the country an emerging one in the year 2030. Cameroon location makes It a gate way for the inflow and outflow of goods and services within the CEMAC zone.

Cameroon is the second bilingual country in the world after Canada. Two official languages are spo-ken in Cameroon both French and English which are the two most used languages in the world of business and international trade.

Cameroon is the only country in the world with the most diversified culture with more than 240 dif-ferent ethnic group with their respective dialect. The main tribes in Cameroon are the Bamileke, Doua-la, Hausa, and Kribi. These are the most dominant culture in Cameroon in terms of authority and posi-tion in the country.

Cameroon is a situatable country for investment due to the good business atmosphere put in place by the government for foreign investors, the country is also blessed with abundant natural resources such as Timber, Cocoa, Oil, Petroleum, Gold, Diamond, Banana, and Gas. These resources one can invest in Mining, Agriculture, Plastic recycling, Banking, Food manufacturing, music business, and movies business.

The constraint of this thesis will focus on the area the research would not cover due to one reason or the other. The research will focus more on the major business cities of Cameroon and not all the 10 provinces of Cameroon. The thesis will focus more on the diversities cultures in Cameroon and how it’s affect business in Cameroon, and the Cameroon’s economy. The researcher being a student will face some financial difficulties as the topic requires him to exploit 10 provinces with a population of over 23 million inhabitants and 240 tribes, the researcher will also be limited by distance as he lives in Finland and the research is being taken in Africa (Cameroon) but thanks to advanced technology the researcher will exploit the use of social medial such as emails, phones and google in order obtain in-formation and martial, and finally the researcher will not have enough information’s as the work is being done by a single person