Entrepreneurial and parental love : are they the same? 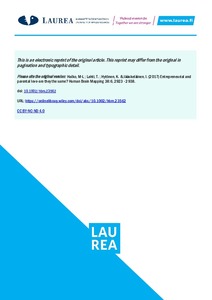 Here we tested the hypothesis that entrepreneurs’ emotional experience and brain responses toward their own firm resemble those of parents toward their own children. Using fMRI, we measured the brain activity while male entrepreneurs viewed pictures of their own and of a familiar firm, and while fathers viewed pictures of their own and of a familiar child. The entrepreneurs who self-rated as being very closely attached with their venture showed a similar suppression of activity in the posterior cingulate cortex, temporoparietal junction, and dorsomedial prefrontal cortex as fathers during viewing pictures of their own children versus familiar children. In addition, individual differences in the confidence trait influenced the neural encoding of both paternal and entrepreneurial processing. For underconfident fathers, a picture of one’s own child was associated with stronger activation and for overconfident fathers with weaker activation in the amygdala and in caudate nucleus, a brain structure associated with processing of rewards. Similar association with activation, yet more widespread in the emotional processing network, was observed in entrepreneurs suggesting a similar neural basis for increased sensitivity to threats and potential risks concerning one’s venture and child. In conclusion, both entrepreneurial and parental love seem to be supported by brain structures associated with reward and emotional processing as well as social understanding.