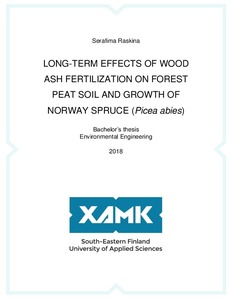 Approximately 50% of Finnish peatlands are drained for forestry and agricultural purposes. Drainage process may lead to the lack of nutrients and other needed chemicals and negatively affect the peatland environment, and for the reduction of negative impacts on soil and vegetation could be laid out so-called wood ash fertilization. The use of wood ash also reduces the amount of unrecyclable ash emissions from forestry and pulp production, decreasing the waste problem.

This study was dedicated to the long-term effects of self-hardened wood ash application on peat soil in the catchments of two small lakes, Nimetön and Tavilampi in Evo Forest area, which were fertilized in winter of 1998. The short-term experiments (1997-2002) demonstrated that wood ash application positively affects the soil chemical structure, needle composition and growth of Norway spruce, which is the dominant tree species in both areas.

In this study, the vegetation analyses revealed that nutrients, appeared after application of wood ash, are still positively affecting the growth of trees and thickness of spruce needles 20 years after ash treatment. The values for pH in the sampled fertilized peat were considerably higher than in control point, whereas conductivity was lower, which approves the existence of long-term fertilization effects. However, the average value for pH in soil is already in acidic range, and that phenomena can have negative consequences to the environment due to heavy metals, contained in the wood ash. In future it could be recommended to use granulated wood ash due to its lower concentrations of heavy metals in the structure.