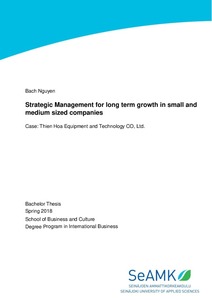 The thesis’s focus is on Thien Hoa Equipment and Technology, a small sized company with roughly 30 employees, is the sole distributor of heavy industry products in the Vietnamese domestic market for different widely known brands in the world, including Japan’s Bridgestone, Sweden’s Atlas Copco… The company is located in Hanoi, the capital city of Vietnam, of which GPD per capita is considered among the fastest in the world at the average rate of 6.4 percent per year since the 2000s. Thien Hoa has faced many competitors over the years of different product tiers, from low to high, due to the highly competitive and fast-growing economy. In fact, the company has to develop constantly sustainability strategies in order to achieve annual growth. With over a decade of experiences, the company’s case will be an example used to raise awareness on why strategic management a crucial factor in each company’s advancement in the markets over their competitors. The research demonstrates how the organization reacts to the environment and apply suitable actions such as expansion, stability as part of the company’s own operation. A semi-structured interview is conducted in the research, combining with the real observation of the author during the internship in Thien Hoa back in 2015. The theories relating to strategic management and sustainable development have been selected to describe the theoretical framework of the research. In addition, they will serve as the applications to the practical case study of the thesis.