From the airport to the city centre: GoSleep Pod as a part of pop-up hotel concept 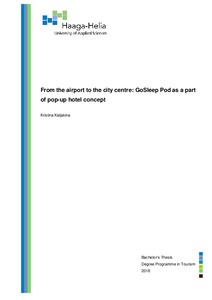 GoSleep Oy is in charge of operating Sleeping Pods in the airports. It has worldwide presence in international airports including Helsinki, Tallinn, Dubai, Moscow and Baku. At the moment, the company is interested in a pop-up hotel concept to expand its market to the city centre. Thus, the aim of this research is to improve the current and future offering of the company.

The following paper includes both quantitative and qualitative research methods. Current offering of the GoSleep Lounge is analysed by the means of a survey, which was conducted in Helsinki Airport in October 2018. Questionnaire was handled by the thesis author during her working hours as an Administrator in the Lounge. Total number of respondents was 98, including both actual customers of the GoSleep Lounge and potential customers.

The potential for future offering was discovered with the support of the content analysis and one semi-structured in-depth interview. Content analysis described major events organised in Finland that create additional demand for the accommodation. Also, it provided information about existing pop-up hotel competition. The interview conducted with the Congress Manager of the largest event venue in Finland supported the findings regarding events industry and pop-up hotel potential.

The entire investigation was focused particularly on the Finnish market. Survey findings proved that Helsinki Airport passengers are aware of the GoSleep product and actual customers of the GoSleep Lounge are ready to use the service again in the future. Participants’ suggestions for improvement indicated that the Lounge is in need of improving its sleeping inventory and the Lounge area should be situated in a quiet area of the airport.

Furthermore, the analysis of market potential demonstrated that there are a number of events to aim at, however, the company should be aware of the existing competitiors in pop-up hotel business. Also, conducted interview with the event industry professional proved that the pop-up hotel concept has potential but requires thorough organisation. Event visitors are in need of all basic facilites including shower and working space.

Based on the key findings, this paper provides GoSleep with a concrete action plan to improve the current and future offering.