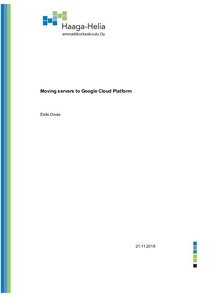 This thesis goes into detail about migrating servers towards Google Cloud Platform. It was commissioned by Gapps Oy, where the writer works.
Google Cloud Platform is a cloud computing platform that anyone can start using and take advantage of the many services that Google has developed for themselves originally but has now shared with the public. They offer Google Compute Engine as an Infrastructure as a Service solution, which lets consumers or organizations use Google’s data center capacity for hosting servers.
The thesis goes through the free tools that Google offers for migrating existing servers to Google Cloud Platform. CloudEndure and Velostrata have different requirements for functioning and the way they work is opened.
There is almost always a need to know what type of things you need to pay attention to when migrating servers, so those are explained. These include networks, firewalls, licensing and other dependencies. The explanation also serves as a learning method for a reader to know what kind of a setup there needs to exist on Google Cloud Platform.
The results of this thesis are task lists for CloudEndure and Velostrata migrations that someone with previous knowledge of Google Cloud Platform can use as a guide when performing server migrations. The task list for CloudEndure was used to migrate a live server from UpCloud to Google Cloud Platform successfully. This served as a Proof of Concept method to verify that it can be used for migrating servers.
Further improvements need to be made to the Velostrata task list as it was not tested in this thesis due to the heavy configuration requirements.