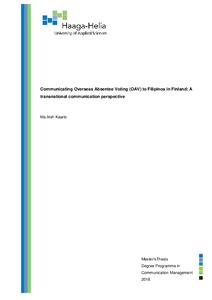 The Philippines is one of the biggest sources of migrants in the world. Decades of migration resulted to around 10.2 million Filipinos currently living overseas including 50,000 in the Nordic Region. Recognizing the significant contribution of the diaspora and transnational ties to the homeland, the Philippine government through its institutions are urged to find ways that will strengthen its relationship with the diaspora. Hence, the Overseas Absentee Voting (OAV) was introduced in 2004 in a bid to officially incorporate overseas Filipinos in political affairs of the country. At the same time, the implementation of the OAV comes with the challenging task of enjoining overseas Filipinos to participate in the elections.

Statistics show the dismal performance of OAV by its failure to hit registration targets and low voter turnout from 2004 until the last elections in 2016. Although latest news said that registration for the May 2019 elections hit an all-time high following a massive campaign by the key implementing agency and this study’s case organization, the Commission on Elections (Comelec), it remains to be seen if this trend will continue or how many of those who registered will cast their vote.

In the light of the challenges Comelec face in communicating OAV to Filipinos in Finland, this study argues for a transnational communication perspective, which recognizes the contextual factors affecting the propensity of overseas Filipinos to vote. Filipinos in Finland, like many diaspora populations, live in a complex space where they actively participate in two communities - the home country and the host country. This is the space that Comelec needs to carefully navigate as they aim to mobilize this group into participating in the elections.

This case study examined Comelec’s current communication practices vis-à-vis the conditions the conditions of Filipinos in Finland. Initial development ideas were drawn from qualitative interviews. The next phase triangulated these ideas through a survey wherein findings were used to confirm and refine the initial ideas.

Findings revealed that Comelec has not fully optimized the channels and opportunities they have by focusing on formal channels of communication. Moreover, there is great potential in exploring more novel ways to communicate via informal and community-based channels. Thus, the final recommendations were constructed in a way that the domains in the transnational framework are covered, guided by the insights from empirical data.