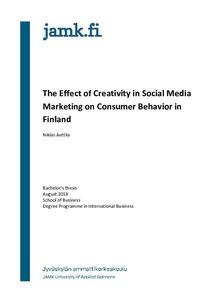 Marketing efforts and the use of advertising channels continue to change drastically. This has changed the ways in which consumers see and interact with marketing, which has made it a challenge for businesses to build relationships with consumers on marketing channels, such as social media platforms. The aim of this study was to examine and bring insight on the impact of creativity in social media marketing on consumer behavior in Finland to fill this research gap. Theoretical literature was collected from diverse literature sources including past thesis works, academic journals and research articles. Primary data was collected through semi-structured interviews with ordinary Finnish consumers. An NVivo qualitative analysis software aided the thematic analysis process performed to identify themes within the data which were member-checked to ensure credibility.
The results revealed that higher advertising creativity in social media advertising increases ad-attitude, word-of-mouth and purchase intentions. Advertising which lacked creativity resulted in negative consumer behavior, such as blocking advertisements and causing annoyance to the consumer. Consumers also considered other elements important in social media marketing, such as relevancy and subtlety. Prior academic research suggests that
advertisements should be divergent by being novel and standing out from other advertising. The results suggested that advertisements should not stand out as
advertisements on social media platforms and should, instead, blend into the rest of the users’ social media content.