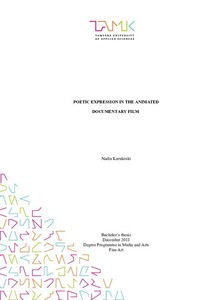 Poetic expression manifests in different ways in a film's form, visual style, sound and rhythm. The most frequently used means of audiovisual association in poetic narration is a metaphor. The animated documentary film has the advantage to depict the metaphors by the unlimited imagination of the filmmaker. Animation has proven to be a safe and suitable way for explaining personal topics with vulnerable subjects such as people facing mental health issues or persecution. At its deepest, as in the case of poetry, the poetic animated film reveals universal feelings, experience and knowledge.