The Redevelopment of the Bosnia and Herzegovina Ice Hockey Federation 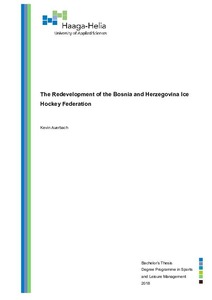 While hockey would not normally be associated with Bosnia and Herzegovina, hockey has existed in the country for over seventy years. Over the past thirty years the hockey community has experienced hardships including the destruction and reconstruction of their ice hall, the collapse of another, little government support, misappropriation of funds, and internal power struggles amongst the community.

While easy in practice, the establishment of key core beliefs and professionalism may be harder to realise due to the current situation amongst the clubs and the personnel of the former federations and their current involvement.

While the glory days of ice hockey and the period that followed the 1984 Winter Olympic Games in Sarajevo are in the past, a new ice hall and a new federation presents itself an opportunity for growth, change and real prosperity. Starting with the federation, and the practices of good governance, the hockey federation will need to look at other national governing bodies and international sport federations to learn how their own federation should function.

Once the new federation has decided on a mission and a new direction for hockey, along with the goals that they wish to achieve, they will need to set up working groups to support and carry out their vision to affect positive change in the hockey community of Bosnia and Herzegovina