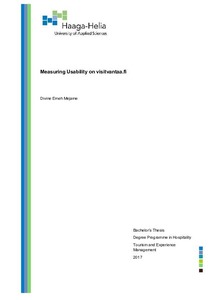 This research work or better still thesis, presents a scope of evaluation of usability on visitvantaa.fi. The research will cover possible usability problems in using visitvantaa.fi and possible recommendations for improvements In this research, definitions of usability plus some literature reviews, formed a solid base with which, a balanced analysis of results were obtained. The results of this study were obtained through a test procedure known as the think aloud test protocol, involving a total of five participants. The think aloud testing type used for this research is the traditional in the lab testing method. The participants had a total of ten questions/tasks to complete and at the end of each question had to give their feedback plus recommendations.

The usability testing for this research was conducted within a two weeks’ timeframe from the 5th of November 14th of November. Part of the test was conducted in Hotel Haaga and RAUHANLITTO, which is my place of work. The test process participants were allowed to verbalize their thoughts as they performed tasks, while the moderator observed and took notes. The tasks completed by participants, brought out some fundamental usability problems of visitvantaa.fi website. In the process of analysing these problems, they were grouped according Nielsen’s severity of usability problems which is on a scale of 0 to 4, with 4 being the most severe problem. The results of the finding revealed a series of usability problems on visit Vantaa.fi. According to Nielsen’s severity of usability problems, two aspects were identified and that need immediate attention. The problem of links that do not redirect to details were identified and placed under catastrophic problems. Secondly, there were links that had only Finnish language, this was placed under category 3, major usability problem which also demand priority fixing.