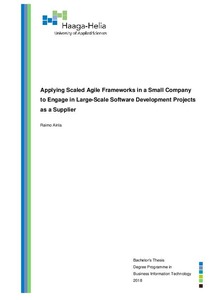 Having been successfully adopted in many different fields, agile is becoming increasingly popular. In order to build on the tangible success of traditional agile, for instance in customer-centricity, several frameworks have been developed for larger scale, such as Scaled Agile Frameworks (SAFe). Larger-scale agile transformation has been researched, however the topic of smaller supplier companies fitting into SAFe has not yet been studied adequately. The paper attempts to fill the research gap mentioned. Several large-scale agile methodologies are considered in the theoretical background, however the main focus of the study is SAFe. The aim of the research is to map out areas of strength and weakness of the company in taking part in projects as a supplier utilizing SAFe.

The main questions that the empirical research answers are: to what extent do the company values agree with those of agile; what are the capabilities of the company in engaging in large-scale agile projects as a supplier. One of the included studies employs mixed methods in the form of a questionnaire, having mostly closed-ended questions, in order to give a more accurate picture of certain performance indicators. The rest of the research is qualitative, having open-ended questions, in order to highlight common themes. Results will be analyzed accordingly, with statistical figures presented for the closed-ended questions as well as a thematical analysis provided for the open-ended questions.

The findings indicate that the company possesses strength in certain key areas that are considered important for agile, such as: management support, flexibility to change and customer involvement. However, the company also displays noteworthy shortcomings in the matter: a lack of coaching and training of agile values; weaknesses in the cross-functional aspect of teams; inconsistencies in the processes, tools and practices across the company. Therefore, the company can do well in projects where the scope is smaller and the iterations shorter. Yet, it is not quite ready to take on larger-scale projects using SAFe as a supplier, before improving on the vital areas mentioned.

The thesis can be a valuable asset in mapping the readiness and capabilities of a company in both traditional agile as well as large-scale agile. Also, it can help a company pinpoint the critical areas needed for greater customer satisfaction, higher operational efficiency and thus advancing the competitive position on the market.