Value of a Draft Pick : Analysis of the Ontario Hockey League Priority Selection 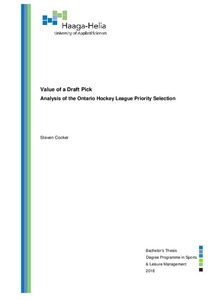 In majority of professional sports the draft is a core component in building the framework of success for your organization. Successful drafting equals long-term success as it gives an opportunity to add youth and promise to the depth chart. On the other side, poor drafting or mishandling of draft picks in transactions can lead to many years of a poor product on the field of play.

Focusing on ice hockey, there has been prior research projects into the value of the draft and draft picks at the National Hockey League level however the same cannot be said for junior hockey in Canada, specifically the Ontario Hockey League which will be the main area of focus.

The objective of the thesis will be to determine value of each individual draft selection in the Ontario Hockey League Priority Selection in order to fully understand what can be expected with each pick and be better utilized in transaction and on draft day as well as to shed light on the undervaluing of draft picks.

Focusing on the drafts between 1996 and 2011, data will be gathered on 4886 players drafted between those dates. From all the data points we have available for use, including games played, goals, assists and points, we will collect this information to find trends in values and similarities between positional players (forwards, defenceman and goalies).

In summary, our results were similar to that of research done at the National Hockey League level in seeing the highest degree of regression coming between the 1st and 2nd round while showing the difference between the latter rounds 10th through 15th were relatively close in value.