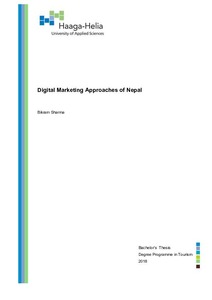 Since, a Nepal country with a different cultures and ethnic groups has some prospective in the terms of future tourism so the main aim for choosing this topic is to make the concept of the cultural diversity more broad and its perspectivness Nepal is a country that is culturally highly diverse. From the Terai (Southern parts) to the world’s highest peaks in the North, Nepal is home to a wide variety of ethnic groups, all speaking their own language and possessing their own cultural traditions.

Nepal is popularly known to outside world in different aspects; home of gods and goddesses, the home of living goddesses, snowy peaks Himalayas, Yaks and yetis , Brave Ghurkhas, the birthplace of Gautam Buddha. The country has remained independent during its whole history and civilisation and also is being able to preserve its culture. A case study and content analysis was used as a research method to figure out how the culture of Nepal has been presented by the tourism companies on their web portal and to find out the growing trends in the cultural tourism and its preservation. The overall thesis reflects that how the culture can be taken as tourism product and overall the potentiality of tourism growth in Nepal with the preservation and promotion of culture.

The main objective of the research was to analysis the roles of Nepal travel agencies in the promotion of culture and also to analyze the impact of e-tourism on travel agency operation for how they reflect the culture of the Nepal on their web-portal.