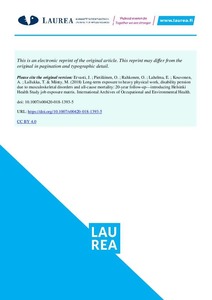 Purpose
We developed a job exposure matrix (JEM) to study the association between long-term exposure to heavy physical effort or heavy lifting and carrying at work with disability pension due to musculoskeletal disorders and premature all-cause mortality.

Methods
Exposure to heavy physical effort at work during 1996–2005 was estimated with JEM developed for this study population, where the exposure was based on occupational titles of the participants. We included all employees of the City of Helsinki, Finland, who had annual data of exposure for 8–10 years (1996–2005, n = 18387). The outcome variables were register-based, and the follow-up was from 2006 until 2015. The risk estimates were evaluated using competing risk survival analysis.

Conclusions
Eight to ten years of exposure to heavy physical effort at work is strongly associated with disability pension due to musculoskeletal disorders. This exposure also increases the risk of premature mortality, particularly among men.