Deep in the Cold (3D) : Interactive video installation adaptation of a photobook 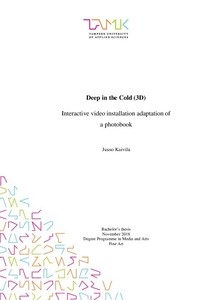 This thesis explores the issues and solutions in the development of an interactive video work based on a photobook. Different software and hardware solutions was considered with the focus on their functional and semantic properties within an art exhibition, while maintaining an affordable development resource scheme.

As such, modern entertainment devices in the realm of AR and VR were studied for display purposes, with more traditional two-dimensional projection as an alternative.

The user interface of an artwork becomes a factor with the inclusion of interactivity, as does the role of the audience: both active and passive (observer) roles are to be considered, especially with regard to technical requirements and resources.

Video game logic and theory is explored within the requirements of a fine art gallery. The physical aspects of the installation, including the control scheme, were studied.

The nature of the virtual adaptation, in contrast to the original artwork, was considered. The visual and emotional aspects of the photobook were adapted to an entirely new form, with the inclusion of characters and objects that tell their own story.