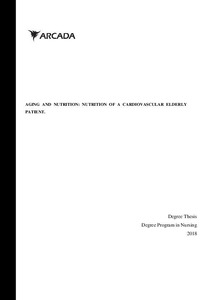 The current literature study sought to add to the existing knowledge by assessing the prevalence of CVD among elderly Finnish people and the nutritional guidelines that can help prevent or manage the disease. Under the guidance of King’s goal attainment theory, the author reviewed ten scholarly articles and established that most Finns suffer from four common forms of cardiovascular diseases: the coronary heart disease, hypertension, cardiac failure, and cerebrovascular disease. Consistent with existing evidence, the study found that some nutrients could be used in the management of these cardiovascular diseases. Consuming foods low in sodium, high in vitamin C, D and E were for instance found to be critical in the management of cardiovascular diseases. Plant proteins, magnesium, and coenzyme Q10 were also found to be reducing agents for cardiovascular diseases. Those who consumed fish and omega-3 supplements, as well as phytosterols, could also minimize their chances of becoming hypertensive. Based on the evidence pointing to the health benefits of nutrition, the study recommends that elderly Finns adhere to a healthy diet plan. It is recommended that they consume fresh foods, without adding table salt, sugar or high-calorie gravies that are cooked using methods that do not destroy the original nutrients. Moreover, the writer suggests further studies be undertaken to determine the diets that are rich in the identified nutrients.