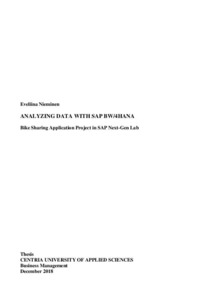 SAP Next-Gen Lab (NGL) in Centria started its activity on 8th of January, 2018. NGL is student-lead environment where students are able to do projects with SAP technologies. In January, the NGL activity started with overall eight students and the first project was given by University Competence Center Magdeburg.

This thesis focused on the process of data gathering, bringing data to the SAP BW/4HANA system and data presentation in SAP Lumira. Besides that, this thesis described the difficulties and problematic situations of the process as well as was considering what could have been improved on this project process in future.