Logistics strategy,trends and challenges in the western regions of china 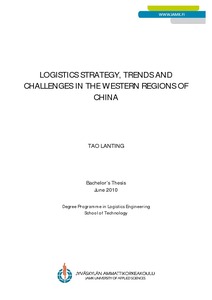 The purpose of the thesis was to research the relationship between regional economy and logistics, and
logistics and information development in China. The focus was on finding out how both of these
relationships are involved in the Western Development strategy. The final target of the Western
Development strategy is to solve the disparity between the eastern and the western regions of China.
The issues are interlocked.
The western regions are rich in resources and there are many advantages. But due to the disparity
between the east and the west, the most important steps are to attract foreign direct investment and
sustain industries. Considering these two factors, there should be enough markets in the west.
Supposing that telecom companies and architecture companies want to transfer industries to the west,
for those small and middle size companies, the main problem is the transfer itself and finding enough
support for transferring.
From the western point of view, the western regions want to develop their economy, and what they
have now is specific products. They need to bring them into the local market and promote in the
country.
Obviously, it is only through the 3rd party logistics and complete information system can help those
companies and the western business can be helped. And like this step by step, the economy in the west
can be developed.