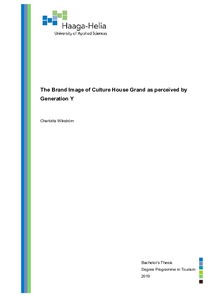 This thesis was commissioned by Culture House Grand, a culture house in the heart of Porvoo that serves as a platform for all kinds of culture activities and events. Grand is well established with customers in the age group 50+ as well as with children. Through this thesis Grand wanted to gain understanding about their current relationship with local people aged 20-40, also known as Generation Y.

The objective of the thesis was to find out how well-known Grand was among the target group, people aged 20-40 in the Porvoo area, what kind of brand image they had of Grand, as well as through what channels Grand could reach the target group.

As research methods a quantitative survey as well as semi-structured interviews were chosen. Based on 113 answers to the survey as well as five interviewed persons, graphs, word clouds, figures and a poster were created to express the results of the data.

The key findings of the research were that out of 10 people 4 recognized Grand. Grand’s brand image among the target group can be summarized as old fashioned, historical, slightly elitist yet accessible to everyone. Social media, especially Facebook and Instagram, as well as word of mouth are the most used channels of the target group, and Grand should continue to interact and build their relationship with the target group using these tools.