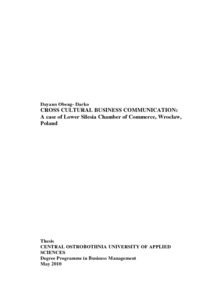 The purpose of this paper is to examine the extent to which Lower Silesia Chamber of Commerce gives thought about cross cultural communication within the specifics of these four cultural dimensions; Power Distance, Individualism versus Collectivism, Affective versus Neutral, and Time and also to particularly determine if cross culture communications has any bearings on the organization‘s business endeavours internationally.
Qualitative research approach was adopted in this study. Research is based on four face to face interviews conducted with staff of Lower Silesia Chamber of Commerce. Theories on cultures and communication in the theoretical section are based on theories of four scientists; Geert Hofstede‘s national culture theory, Fons Trompenaars culture business theory, Edward Hall‘s high and low context theory and William Gudykunst‘s anxiety/ uncertainty management theory.
Research findings showed that Lower Silesia Chamber of Commerce exhibited some character traits which have been established by scientists for business in cultures such as the Polish culture. For example, the study showed that staff of the chamber prefers to work individually. This is a characteristic of employees in individualistic cultures according Geert Hofstede. Respondents however, also showed that some established theories are not the case in the organization. For example, the study proved that authority is not extensively explicit in the organization as it is a characteristic of businesses in high power cultures according Geert Hofstede. Research results also showed that cultural dynamisms have bearing on all aspect of the chamber‘s activities.