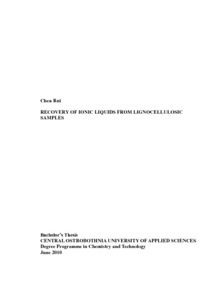 Ionic liquid is a kind of liquid which is composed entirely of ions, such as KCl, KOH solids can change into liquid at a high temperature. Ionic liquids were formed by organic cation and inorganic anion (chloride, in this thesis). The recovery was significant because ionic liquids should be recycled in the process and they disturbed or hinder the chemical analysis.

The aim of this thesis was to recover of ionic liquids [AMIM][Cl] and [BMIM][Cl] from the pretreatment of cellulose and lignocellulosic samples (substrates). In the experiment part, although the result was not so good, how to recover the ionic liquids was clearly showed in laboratory.

Ionic liquid has already been applied in many chemical reactions, such as polymerization, acylation, esterification and electrochemical synthesis. And these reactions have showed fast rate of reaction, high conversion rate, exact reaction electivity, catalytic system can be recycled reused and other advantages.