Gender Roles Portrayal in YouTube Advertisement in Russia: A look into Russia's gender equality values in the context of Hofstede's and GLOBE cultural frameworks 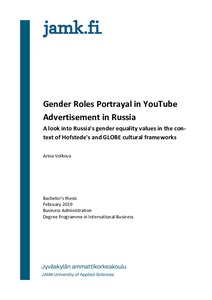 Volkova, Arina
All rights reserved. This publication is copyrighted. You may download, display and print it for Your own personal use. Commercial use is prohibited.
Näytä kaikki kuvailutiedot
Julkaisun pysyvä osoite on
http://urn.fi/URN:NBN:fi:amk-201904104760

Nowadays, gender equality is one of the global issues, and advertising is one of the ways in which gender equality values manifest themselves. Prior research agrees that women normally are the ones stereotyped in advertisements. The recent “MeToo” and “Time’s Up” movements have sparked conversations, and a new wave of socially responsible advertising that needs to be studied, especially on online media platforms that flourish today.
The purpose of the paper was to define patterns related to gender role representation in advertisements and see how well they correlated with Hofstede’s and the GLOBE cultural frameworks, specifically in the gender equality related dimensions. YouTube was chosen due to its popularity and cultural significance, while Russia was chosen as a country with a unique historical and cultural path regarding women’s liberation. Hofstede’s and GLOBE cultural frameworks were used as reference for country-specific gender equality values.
The research was quantitative in nature, and the method used was content analysis. Extensive theoretical research was done prior to the practical part of the study. A coding scheme was developed, and 74 commercials were coded and analyzed by the author. After this, the data thus generated were statistically analyzed.
The results showed some sexist tendencies in Russian commercials as well as an overwhelming portrayal of young women in decorative roles. The study indicated that Russian marketers are not willing to address gender equality yet and that cultural frameworks have to be studied more critically because the results did not correspond to some of the chosen dimension scores. The author then gave recommendations for future research, such as expanding the coding categories and the range of countries studied.