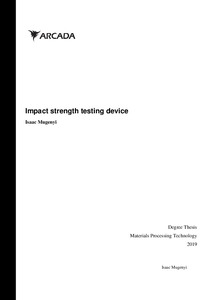 MUGENYI, ISAAC
All rights reserved. This publication is copyrighted. You may download, display and print it for Your own personal use. Commercial use is prohibited.
Näytä kaikki kuvailutiedot
Julkaisun pysyvä osoite on
https://urn.fi/URN:NBN:fi:amk-201904134972

The idea of this thesis to design and assemble the different manufactured components into an Impact Strength Testing Device (Izod). The machine will have four major com-ponents to it; frame, clamp, pendulum hammer and the scale or meter to read the data.
First, the individual parts of the of the test device are designed in SolidWorks software and brought together into a final assembly. The manufactured parts are assembled to-gether and welded were needed.
Secondly, to use the test device, it must be calibrated to the standards and both the static and dynamic method were used. The dynamic method of calibration was preferred to the static because of its easy repeatability and accuracy.
In addition to the traditional dynamic method of calibration, which relies upon the measurement of angles, the alternative method in this thesis uses the Potentiometer to measure the voltage and periods as the pendulum oscillates freely with or without the hammer mass. Two distinctly different oscillations were recorded, getting periods that were used to calculate the centre of mass for the entire pendulum. Voltage has a linear relationship with the angles measured due to the ratio of division in Potentiometer cor-responding with the angles.
Finally, sixty test specimens of composite material were tested and because of the stiff-ness of this material, an overall higher impact strength were recorded to break these specimens compared to polymers.